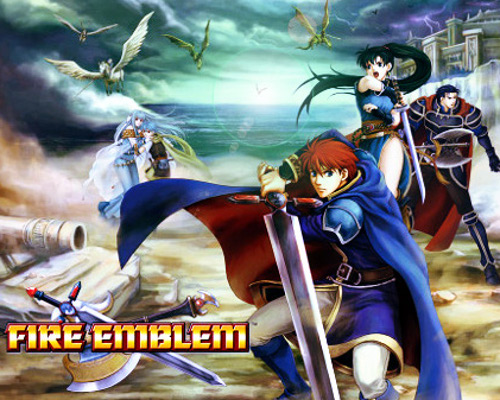 Fire Emblem: Rekka no Ken (translated as The Blazing Sword or The Sword of Flame) is a turn-based strategy RPG game released on the Gameboy Advance platform. It is the seventh game in the Fire Emblem franchise, which consists of 14 games to date – the latest title is Fire Emblem: Awakening, which was only released internationally several months ago.

I have completed this game for at least 7 or 8 times in the past, it was an amazing game. Recently, to keep myself occupied while travelling between places, I played it again. The following paragraph might contain some possible spoiler as I’d like to cover a little about its plot, and why you should try this game (if you haven’t already tried it).

A little background about the game — many years ago, humans and dragons coexisted and lived together in peace. However, a war broke out when humans decided to chase dragons out of the land. This war was called “The Scouring”. The dragons were defeated and eventually vanished from the land of Elibe.

Upon the start of the game, you will be introduced to the map of the game. Basicaly, Etruria and Bern are the bigger kingdoms surrounding Lycia, which is an alliance formed by several smaller kingdoms. Slightly north is Sacae, a plains with several tribes. North of it is Ilia. The rest of the countries/kingdoms are not really mentioned in this game.

When you first start playing the game, you can only play the prologue, with Lyn being the main protagonist. She met YOU (the player!) in the plains of Sacae and everything (all the interesting stories :)) starts from there!

In summary, Lyn was a lost heir (granddaughter) of Hausen, the marquess of Caelin (part of the Lycia Alliance). Lundgren, the brother of Hausen, who desires to takeover the title of marquess of Caelin, view Lyn as an obstacle to his cunning scheme. As such, he sent out several forces to kill Lyn and her companions (people you guys recruited along the way to Caelin).

The story take place one year after the prologue timeline. Eliwood’s father, Elbert, the marquess of Pherae went missing. Eliwood and his companions set off to search for his father, and the entire journey starts there.

Slowly but surely, not only did they find out the truth towards why and how marquess Elbert went missing, but also discovered a series of surprising truth that comes about the possible revival of dragons (remember the background of the story, “The Scouring”?) and extinction of humans. Along the way, he met his friend, Hector, the brother of Uther, the marquess of Ostia (the strongest kingdom among the Lycia Alliance). And yes, you will get to meet Lyn and her companions along the way as well — all of them.

Something unique (as much as I know) to the Fire Emblem franchise is that unlike other games of similar genre, when a character dies in battle, they are dead permanently. In most games, such as the Robot Wars series, when a character was killed/defeated in batte, they ‘retreat’, and after the battle, you need to simply ‘pay’ for the repair costs. However, in the Fire Emblem franchise, the difficulty level raises significantly because if you want to complete the game with all your characters survived, you have to plan and strategise your moves carefully — or else you will find yourself keep selecting the “restart chapter” option everytime a character was killed in battle.

Fire Emblem follows a scissors-paper-stone mechanism, which is called the “weapon triangle”. Sain will teach you during the prologue chapter — however, I will briefly mention it here as well. Basically, axes beat lances, lances beat swords, and swords beat axes. As for bows, they are not part of the weapon triangle. However, they are “super effective” against flying units such as Pegasus Knights and Wyvern Riders.

In order to upgrade a unit, you need to satisfy two criteria. Firstly, your character must be above level 10 (level 20 is the max for any unit). Next, you must have the required items – for example, for Knights or Cavaliers to upgrade to General or Paladin (respectively), the item required is the “Knight’s Crest”. The item’s description will tell you as well. My tips for you is to always open all treasure chests you see in game, and visit all buildings/villages, as they always give you some items, or information which allow you to understand the storyline better.

As mentioned briefly above, the level of support depends on the number of turns they are being placed adjacent to each other. Simply, the more turns they spent together allows them to have stronger bonds, and when they reached a certain ‘number of turns’, they will have a support dialog which increases the ‘grade’ of their level of support, starting from C, and all the way to A. The higher the grade, the stronger bonus strength they will both received when they are adjacent to one another 😉

In conclusion, Fire Emblem is an awesome game that is both popular and well-loved by the fans of the Fire Emblem franchise. If you haven’t tried it, you have to! It’s one of the best game on the GBA platform.