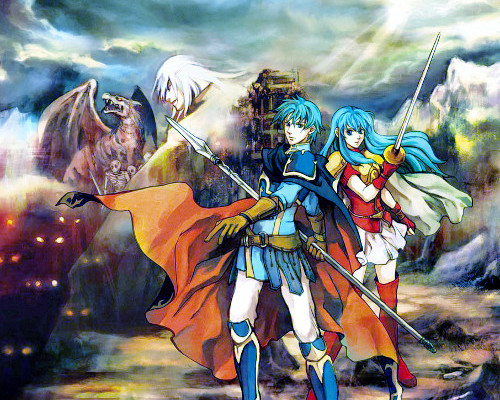 This game focus on two royal twins of Renais, whom their king father Fado was killed, and their nation had fell to the sudden invasion of their long-time ally, the kingdom of Grado. In addition to that, there were monsters appearing all over the continent. This is the only Fire Emblem title on the Gameboy Advance platform that has monsters.

Similar to Fire Emblem: Path of Radiance, this game took place on an entirely different continent from its prequels — the continent of Magvel. There were 6 nations in the continent, namely,

The kingdom of Renais, ruled by King Fado, the father of the two protagonist in Fire Emblem: The Sacred Stones, Ephraim and Eirika.

The kingdom of Frelia, ruled by King Hayden, the father of Tana and Innes. Tana is a close friend with the two protagonist, while Innes is a rival (in a good way) of Ephraim.

The kingdom of Jehanna, ruled by Queen Ismaire, mother of Joshua, one of my favorite character in game.

The Theocracy of Rausten, ruled by Divine Emperor Mansel, the father of L’Arachel.

The Grado Empire, ruled by Emperor Vigarde. This is the main antagonist kingdom. Vigarde’s son, Lyon is the best friend of the two protagonists.

The sixth nation, Merchantile Republic of Carcino, is governed by a council of elders. I mention this nation simply because it is “incomplete” if I only talk about the other five nations. 🙂

In general, Fire Emblem: The Sacred Stones is pretty similar to its previous titles on the Gameboy Advance platform, except for some new features such as the map system and the leveling up process.

Firstly, the map system is something entirely new — in previous titles, player are only allowed to play the game chapters, with no freedom in revisiting towns which they have went past. In this title, players are allowed to move around freely as well as fighting the monsters randomly generated on the world map.

Gameplay wise, it is very similar to its previous titles in the Fire Emblem series; players can easily have an edge over their opponents if they fully utilize the weapon triangle and trinity of magic (zombies are weak against light magic). Terrain as well, is your best friend. Read more on my past posts on these features.

Of course, similar to all other Fire Emblem titles, there are conversation dialogs between characters, and also, support dialogs which allows characters to have stats boost when standing adjacent to one another.

When you keep using a certain weapon to attack your enemies, you will allow it to gain weapon experience (a yellow bar) and when it reaches a maximum, it will increase in its level and reset the bar to empty again. In the screenshot above, Joshua has his Sword level rank “S”, means he can equip almost any sword weapon. The following shows Ephraim, whom only has a rank “A” in his lances.

There is really not much to be picky about. Perhaps, I would say that the number of characters which you can recruit in this game is considered to be quite little somehow, perhaps because you can choose the promotion yourself — so if you use some promotion “wrongly”, you can never get to try all the different playable classes in the game.

An interesting new class in this game is that there are a few characters whom start with class even lower than the basic class. They will auto promote into one of the basic class upon reaching level 10 though. This allows players to even further, plan the “class route” for this character. These classes are pupil, journeyman, and recruit.

Of course, despite being the official (English) North America version, there are still some spelling or translation mistakes here and there. I managed to screenshot one of them as an example though, as follows.