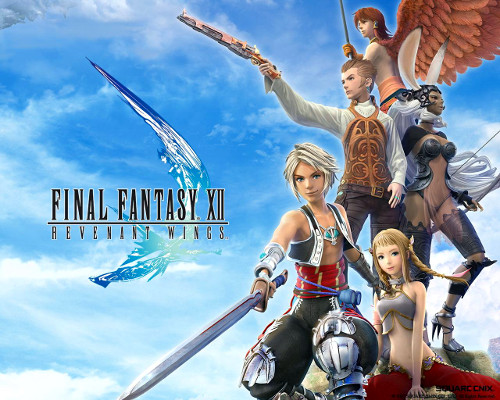 Final Fantasy XII: Revenant Wings is a real-time strategy RPG game published by Square Enix. When it was released back in 2007, it was one of the first of its genre on the Nintendo DS gaming platform. It was the direct sequel to Final Fantasy XII, one of the all-time best selling game on PlayStation 2.

The plot of FFX: Revenant Wings took place one year after the war with the Archadian Realm, when Vaan has satisfied his dream of becoming a sky pirate and flies through the heavens in his very own airship, Galbana, along with his trusted companions, Penelo, Kytes and Filo.

When he and his friends, Fran and Balthier, uncovered a treasure known as the Cache of Glabados, the legendary sky continent of Lemures was unveiled and they find themselves involved in a great adventure, protecting the winged inhabitants of that floating world from the evil Judge of Wings and her illusionary armies.

The rest of the storyline is for me to know and for you to find out yourselves. 🙂

So, as I have mentioned earlier in the article, FFX: Revenant Wings is a Real-time strategy RPG game. It was not only one of the first in the Nintendo DS platform, but also the very first in the Final Fantasy game series franchise, where its unique gameplay was blended concisely with the quick action style games like the Warcraft 3 or DotA.

Basically, the player is able to deploy ‘heroes’ such as Vaan and Penelo. Then, each of them has a certain number of ‘points’ for them to summon monsters to accompany them into battle. In the battle, there will be certain spawning points which you can conquer and keep spawning your very own monsters until the maximum points is reached.

Other than that, everything are pretty straightforward — when you have enough SP, you can use skill to buff your troops (or monsters) or attack the enemy. It’s challenging in a way as you need to quickly make your judgement and navigate around the map when you have several heroes ‘attacking/defending’ at different spot within the battlefield itself.

The game also possesses great graphics of that era (2007). It even has cut scenes to go along with it, what more can you ask for? In terms of spell casting and ability animations, all are very smooth and cool. At least I got no complain for them. 🙂

In short, FFX: Revenant Wings was designed to be controlled by story missions and optional missions. That is, players can choose to continue the story mission and complete the game faster, or choose to complete the optional missions as well to view more storyline and to get more rewards. As you complete the missions, you get to view more entries of posts in the log book within Galbana. This allows players to learn more about the characters’s personalities too.

To sum up, I believe that Final Fantasy XII: Revenant Wings is an awesome game that all Final Fantasy fans should try. It was a unique experience for me and I really enjoyed it. I only managed to try the game pretty recently as I don’t used to own a Nintendo DS back in the 2000s. However, having owned a PlayStation 2 back then, I played FF XII and really enjoyed the game very much. Playing FFX: Revenant Wings brings back so much memories — once again, a good choice for all the FF fans and real-time strategy gamers out there who are looking for a challenge! 🙂